Got the tip from Pryme (who always seems to do me right) and he got it from Gizmodo.

The upshot is that the Romney campaign made a minor spelling error and apparently people have taken the opportunity to razz the campaign about it. Apparently to get in with the hipsters and other cool kids with their iPhones, iPads, Droids and other high-tech handheld devices, the created an app that users could download full of pithy Mittsperational slogans. This would be no big thing if the Obama campaign had made a similar error, for the Republicans at any event for who among us hasn't fallen prey to a simple spelling error from time to time.

If you have not yet guess the word that was misspelled was America we'll let the guys from Gizmodo take it up:


Mitt Romney's new iPhone app, With Mitt, "lets you customize photos with a variety of Mitt-inspired artistic frames." Slogans like "Believe in America," "Obama Isn't Working," and "I'm a Mom for Mitt" are just a few of the Mitt-tastic phrases that can be slapped on your iPhone photos, proudly pronouncing your support of the GOP candidate.

If only he was equally as concerned with supporting our great nation. Much to the delighted displeasure of Twitter, one particular frame option betrays Romney's secret agenda working toward bettering a place known as Amercia. 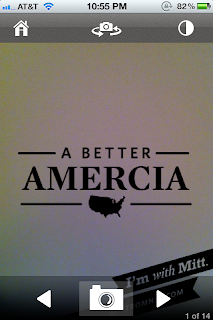 
A-M-E-R-I-C-I-A.  Some might view that as quite the gaffe, and I shudder when I think about how many days Rush would ride that pony if the Obama Campaign had made a similar mistake. How the Sunday Gabfests would spend at least half of their available time parsing the meaning of the gaffe. Because in IOKIYAR world, that would be how they roll.

After looking at the word Amercia, i immediately became a proud one and thoughts floated back to a time before I was born, 1953, to be exact. I started to see the misspelling not as a gaffe, but almost as part of a greater, though subliminal, truth. Since that first successful overthrow of a democratically elected government by the CIA, it might be argued that that was the watershed event, the one that founded the United States of AMERCIA.

That they have managed to fuck up every thing they have had their hands on (a liberal interpretation of the mission outcomes-Blowback anyone?), or were doing exactly what the Powers that Be wanted them to with smashing success (a Conservative viewpoint, destabilize geographical regions rich in natural resources allow your corporations to loot them blind, and all the while in your best Alfred E Newman impression "What, Me? I'm no Colonialist")

In any event I think I can safely say that next year, the truth be told, we will be celebrating the 60th Anniversary (at least) of the Birth of a Nation called AMERCIA.

Provider_UNE
I once thought that I might save the world. Now I try to work on my little piece of it.